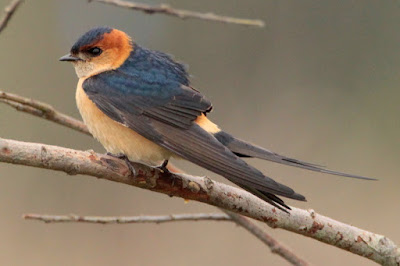 One of the 2 Red-rumped Swallow at Porth Hellick

At 06.20, Paul St Perrier let me know that the male SNOWY OWL was on Gugh feeding on one of the 3 Grey Partridge that were released on St Agnes. Also he had a singing Melodious Warbler. The third this spring in the same amount of days!
Seth and I made our ways down to Lower Moors but there was no sight or sound of yesterdays Great Reed Warbler in the thick fog. However, we got cracking views of the Wood Warbler at Telegraph from me wagon as the bird fed in a roadside Hawthorn but there was no sign of the nearby Melodious Warbler at Bishops View.
Another text from Darren Mason to say he had a singing Golden Oriole at Pendrathen.

At 10.10, four guest wanted a taxi to Porth Hellick to hopefully see the Red-rumped Swallow that had already been seen earlier on. Big Al told me that the swallow was sitting in trees just above him at the ringing station. Some ten minutes later all we could see was an empty tree but Jim was busy catching hirundines. Two of the guest were lagging behind because little known to us, they were observing the 2 Red-rumped Swallow near to the hides. I scanned for them across the pool and just caught a female Golden Oriole disappearing into willows. One of the swallows was relocated flying meters away from us at the beach end and settled on branches only arms length away! Here it rested for a few minutes before continuing to hawk at close range. Seeing birds in the hand, all four left us with smiling faces and I tried to get some flight shots in the dull light before returning to work. Big Al called me to say that Jim has trapped the Red-rumped Swallow! 'NO WAY!!' 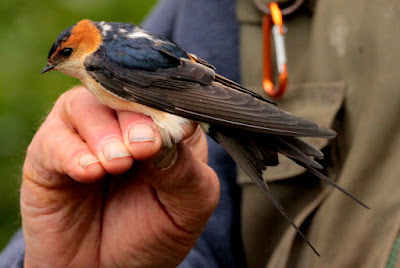 From the white on the back, this is the same individual that we had at Porth Hellick three nights ago. 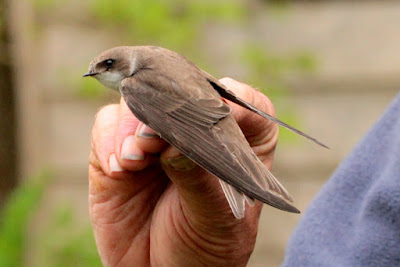 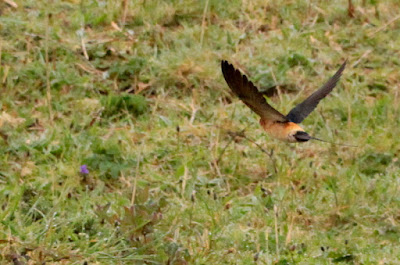 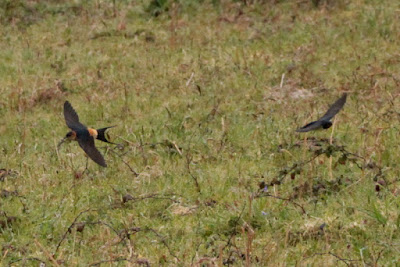 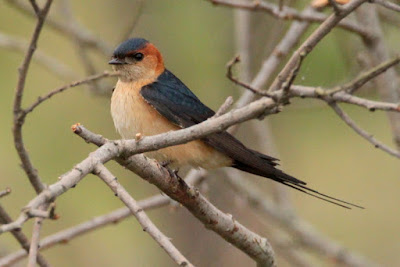 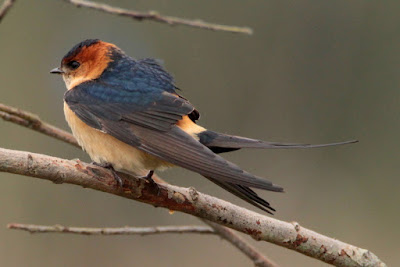 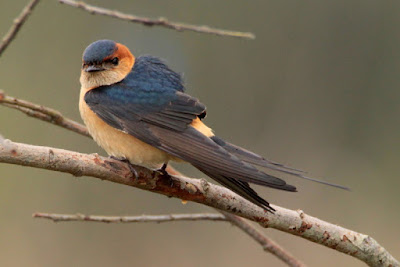 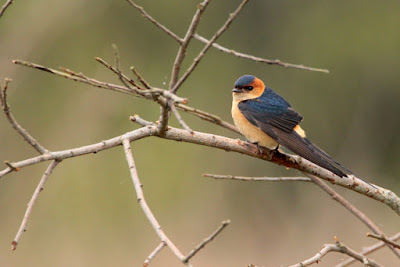 However, from the lack of a white spot on the left wing secondaries, this is a different individual that we had two nights ago at Porth Hellick. this confirms that there were 3 Red-rumped Swallow visiting the latter site in the last three days.

As the fog cleared, at 13.38, the Snowy Owl was observed leaving Gugh and heading our ways towards Porthcressa. All hell broke loose as birders started searing for it on the south end of St Mary's. Before 14.00, Paul Semmons picked it up going past the Woolpack, Garrison, towards my work, Star Castle. I was on the quay and at 15.30, Thinking that it might be on the north end of St Mary's, Seth and I decided to walk the coastal road below the golf course. As we approached the start of the path off the golf course at the west end, ahead of me I saw a small Sylvia warbler fly close to the ground back on in front of me dart into cover. With no white outer-tail feathers and appearing dark, I thought maybe a Dartford Warbler. At the same time as we carefully stalked the warbler to get anything we could on the it, I caught a flash of a female Golden Oriole just above us at close range and we observed it fly off towards the south end of the golf course. Back to the warbler and it made a very brief flight into cover again and this time it showed outer-tails and looked paler. This time I said I this is goin to be a Subalp and a minute later, I got my bins on it as it showed out in the open for 2 seconds. A female 'type' Subalpine Warbler. As I was trying to get a pic, only Seth saw it fly further down the slope but lost it. I informed others and after 10 minutes of searching, I had to got back to work,

An hour later I returned to the forth Tee but before I did, I had another look for the Melodious Warbler at Bishops View as it was seen earlier. This time I connected with it as it sang out in the open. It flew into the hedge that borders the Trewince fields. I went in and Bob Dawson called and as we were talking I looked to the otherside of the field and shouted 'Golden Oriole!' It was perched in the corner and when out of sight I ran up to it and got some cracking views before it flew off towards Sunnyside. A single Spotted Flycatcher and Blackcap were also present. It felt like being in the Mediterranean with 2 Red-rumped Swallow, Melodious and Subalpine Warbler and 3 Golden Oriole. This all changed when the juvenile Iceland flew over the oriole in the dense fog.
Mark Anderson relocated very briefly the subalp much further down the track near to Juliets Garden No sign of it when Tim and I got there and again I had to go to work.

If Seth and I were not distracted by the subalp, then we would of bumped into the Snowy Owl. Rosemary Parslow relocated on the rocks at Bants Carn, just around the corner from where we were, and observe fly off towards St Martins to join the grey GRY FALCON that was seen over Middle Town yesterday 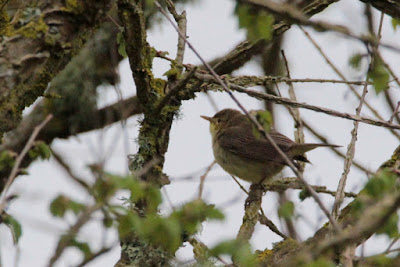 The Melodious Warbler showed well at Bishops View but the light was crap! 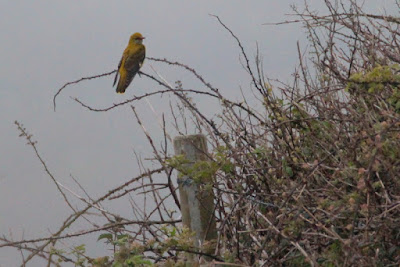 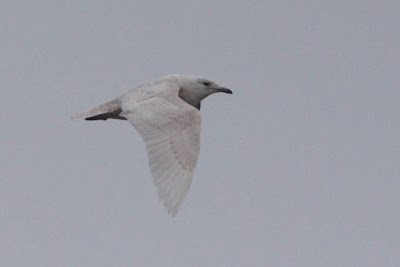 The juvenile Iceland Gull flew over the oriole at Trewince 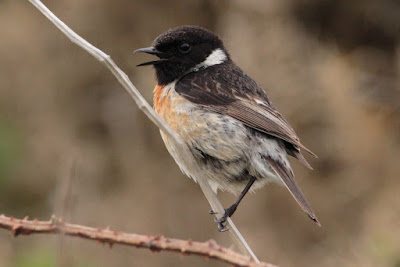 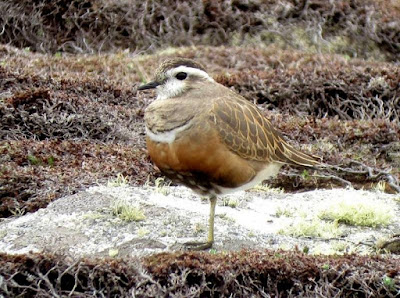 Male Dotterel at Shipmans Head Down, Bryher by Robin Mawer 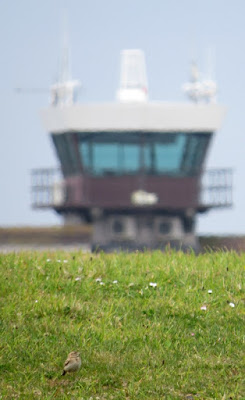 Higgo, Ren and Robin went to Bryher and between they got the male Dotterel and Woodchat Shrike, and 4 Golden Oriole.

Paul St Perrier made a rare visit to the Western Rocks with the seabird group and got 2 Purple Sandpiper, female Marsh Harrier,Great Northern Diver and 7 Common Tern

Elysian Fields is an American band based in Brooklyn, New York, founded in 1995 by the co-composers Jennifer Charles (vocals, instruments) and Oren Bloedow (guitar). Their music has sometimes been described as "noir rock",[1] due to its sultry, dark and mysterious inflections, be it sonically or lyrically. The band uses mainly acoustic instruments, predominantly guitar, piano, bass and drums, with the occasional appearance of eastern instruments, classical strings, and subtle electronics, the focal point being the voice of Charles in the forefront.
Based in New York City, Elysian Fields have found underground success in the United States but are more popular inEurope.[citation needed] The author of The Dark Stuff, Nick Kent, says of their music, "Maybe we have their out-of-the-mainstreamness to thank for a sound that is still unique -- as sensual as a sleepwalker's wet dream."[citation needed] Since its formation, the band has won quite a devoted cult following, largely by word of mouth.[citation needed] Besides its well received albums, the band is also noted for its strong live performances.[citation needed] The rest of the band has included many of New York's strongest players: all the members of Jeff Buckley's band, members of Medeski Martin and Wood, Ed Pastorini, Ben Perowsky, James Genus, Thomas Bartlett, Jamie Saft and members of Ollabelle have all played in Elysian Fields at various times.
Posted by scilly spider at 5/11/2016 11:53:00 pm