Melodious Warbler at the Garrison 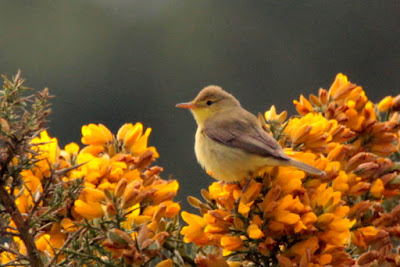 Just after 10.00, I was just about to took into my pouched eggs (all six of them!) and toast, when a text came through from Alison Allen. She had a Melodious Warbler at the tennis courts on The Garrison. As it was only a stones throw away, I was there two seconds flat. I joined Alison and the warbler showed well out on view in the scrub. I called the others and for the next twenty minutes everyone was enjoying the hippo. Dave, the Herring Gull, had followed me in me wagon up road and was circling low over the warbler as we observed it. I drove back, with Dave not far away, opened the door and there he was looking up at me. I fed Dave and then scoffed all 6 pouched eggs off!
Later I had a quick walk around the campsite and all I got was a Turtle Dove and Spotted Flycatcher. However, 925 did a lot better in the same area with Golden Oriole below the Woolpack, 3 Pied and 4 Spotted Flycaytcher. 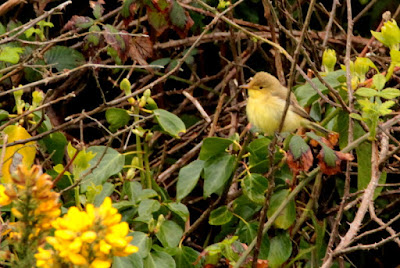 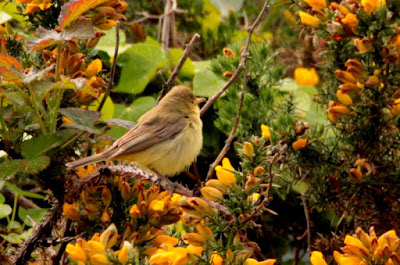 A rare spring record of a Melodious Warbler on The Garrison

I had a look at Trenowth and here there were 2 Turtle Dove, 2 Spotted Flycatcher and a single Tree Pipit. It wasn't until later in the evening that Seth, Robin and I went to see if we could relocate the Short-toed Lark that was not seen yesterday. On the south runway we found it feeding and this time it showed a lot better than two days ago when Ren and I found it. Robin left for the Garrison to look for 925 oriole, while Seth and I ended up at Porth Hellick. Here we saw the 2 Red-rumped Swallow together with over 100 Swallow and House Martin and 2 Sand Martin. 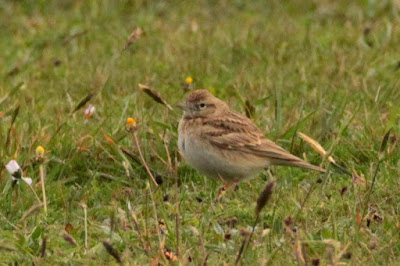 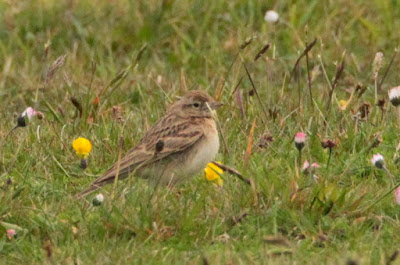 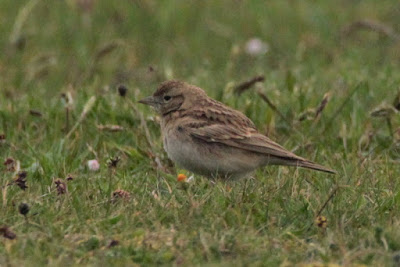 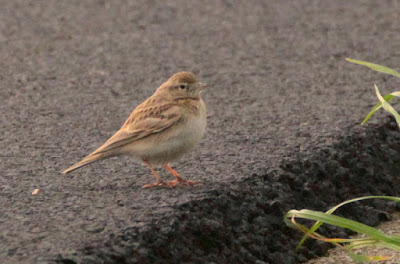 The light can make this Short-toed Lark that was on the airfield, look a different bird 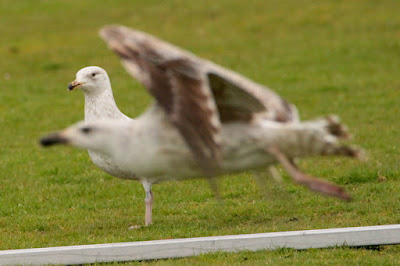 Here's Dave the Herring Gull waiting patiently for me on the football pitch. here he's been photo bombed by a Great-black backed Gull.

Also on St Mary's, another odd spring record after the Goldeneye on Tresco, a female Goosander was showing well off Porth Mellon, 2 Golden Oriole flew over the golf course where both the Woodchat Shrike and Iceland Gull were still present. A single Fieldfare, 2 Golden Plover, 2 Garden Warbler and Redstart were else where

Higgo and Will were on Bryher and got a male GREY-HEADED WAGTAIL. 2 Blue-headed  and Yellow Wagtail, the male Woodchat Shrike, Dotterel, Golden Oriole and SNOWY OWL were also still around.