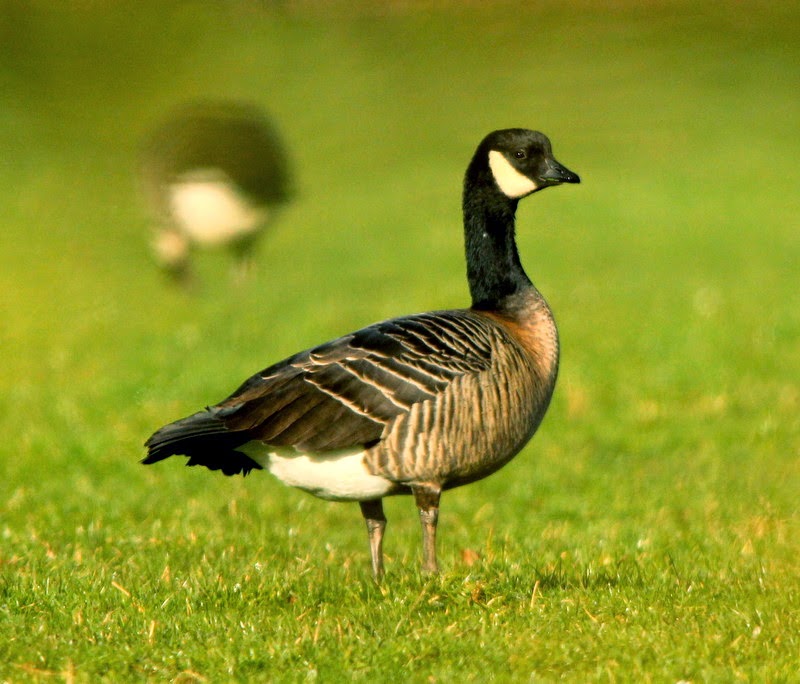 Cackling Goose showing features of mimima in fields by Telford Crematorium. I guess the individual is from last winter that was in the same area.

I've just returned from six weeks working in the Peruvian Amazon Rainforest where there is no internet. What an experience and I will get pics together and upload them on my blog when I find the time. On the plane from Miami, I was shuffling along waiting for people to sit down, when a voice from below me said,'I love that guy'. He was pointing to my Johnny Cash T-shirt that I was wearing. Everyone likes him I replied. Sitting down in the business class, it was the ex-Spurs goal keeper, Brad Friedel. I told him that I haven't seen Match of the Day for nearly two months and I've missed it He told me that he'll be on there in two weeks.' No Brad, I didn't miss you, I said I missed MOTD. Anyways, Alan Hansen is a lot better than you when he used to be on it. He told me to piss off!

Saturday just gone, my uncle Bob was celebrating his 81st birthday and as usual he went to support his favourite team Shrewsbury Town, who were playing bottom of the table Hartlepool at the Greenhouse Meadow. He has been a life time fan for 70 years and at half time,unknown to him, he was called up on to the pitch by Ryan Jarvis, the Salop PA man, to be interviewed. His loyalty was also acknowledged when my aunt Do contacted the Meadow and they did a feature about him in the match program. On his 60th, Joe Gallon and Micky Brown joined his party and 10 years before that, on his 60th, the all-time top goal scorer, the great Arthur Rowley was drinking with him to mid-night at the Bull Inn, Rodington! 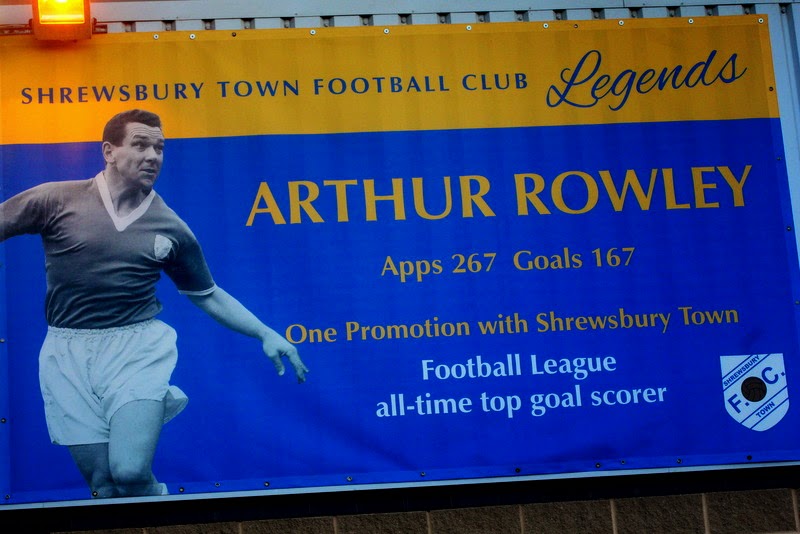 He holds the club record for the most goals in a single season at both Leicester City and Shrewsbury Town, scoring 44 goals in 42 league matches at Leicester in 1956–57 and 38 goals in 43 games for Shrewsbury in 1958–59. He is also Shrewsbury's record league goalscorer with 152 league goals. He is Leicester's second all-time top goalscorer, netting 265 times for the Foxes. 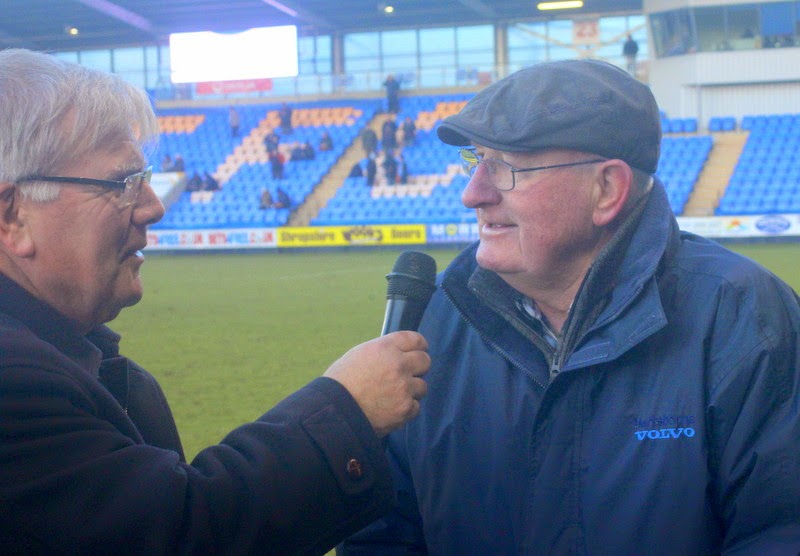 Uncle Bob being interviewed by Ryan Jarvis. As you can see in the background that not many Hartlepool fans turned up. Did you see me kick the football around on the pitch at half time Geoff? I don't know how I did it taking photos and kicking the ball at the same time! 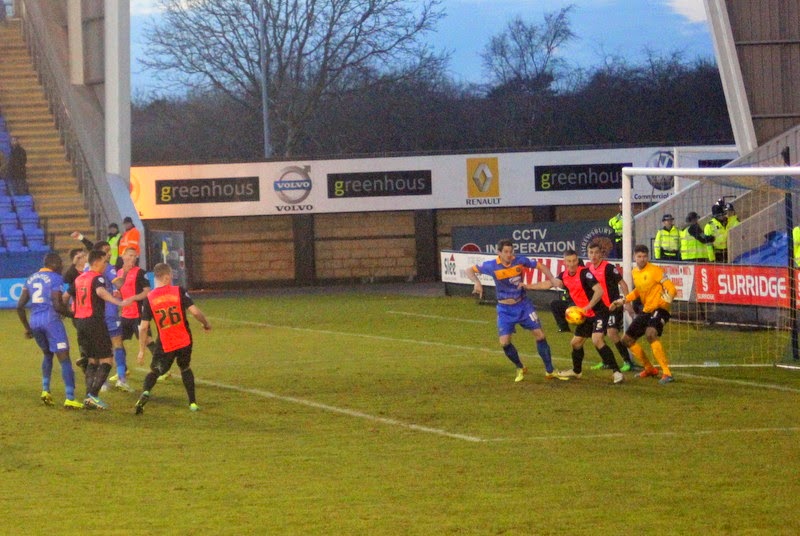 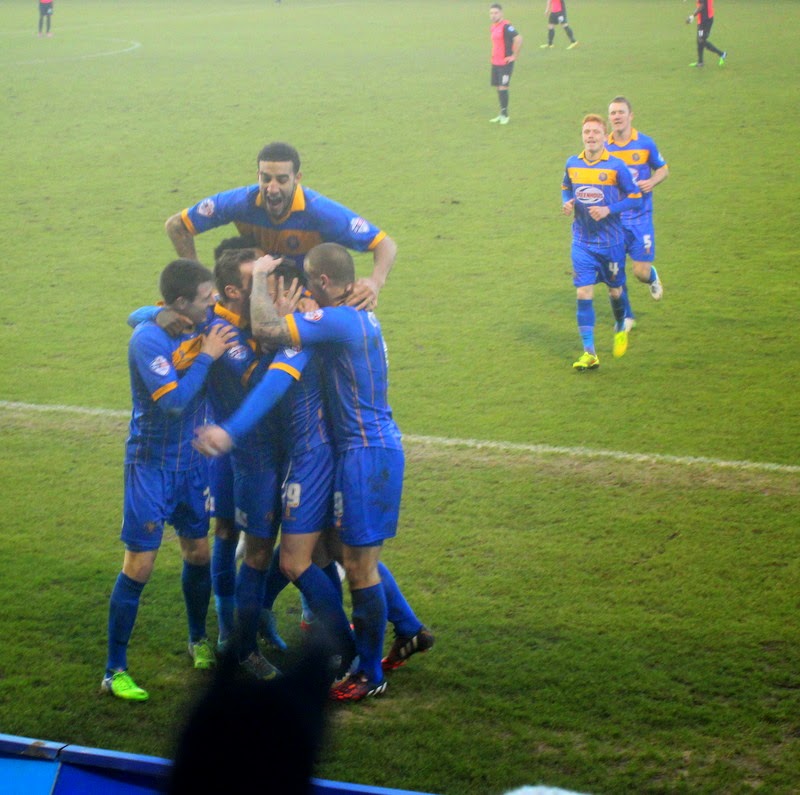 The Shrews celebrating their first goal 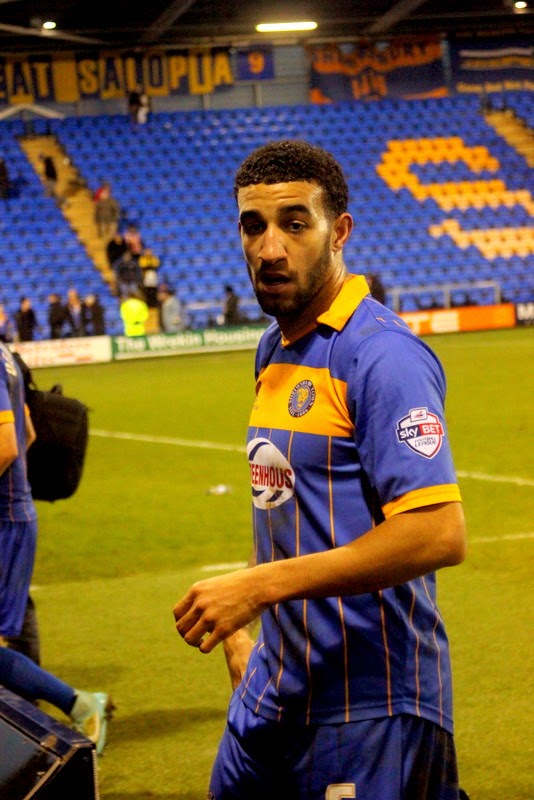 Conner Goldson and where is he from? Wolverhampton! I bet Higgo wished he was playing for his beloved wolves who are going down! 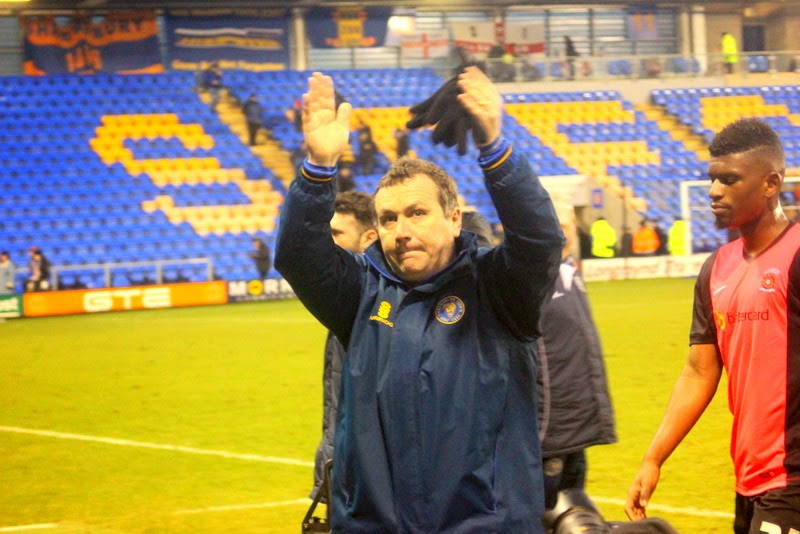 Micky Mellon, pleased with his teams performance. How will Salop stand up against mid-table Stevenage this Saturday. I'll be there supporting the shrews with uncle Bob.

Today, I went out for a few hours near to my parents house. In the fields near to the Telford Crematorium, there were Canada Geese and feeding with them was a Cackling Goose which looked like the one that Tom Lowe found last winter in the same fields. At Prisorlee Lake it was almost frozen over and on the ice there was an adult Yellow-legged Gull. Trench Pool was 80% ice free and as a result some 2000+ Black-headed Gull came into roost. Up to 3 Goosander and 7 Shoveler were also on the pool. I've only seen a single of the latter species before at this site. 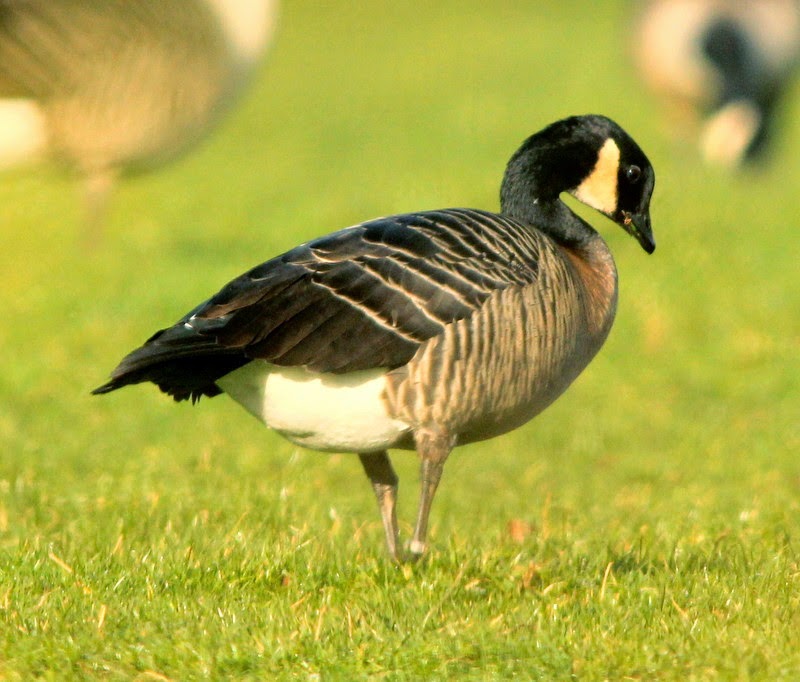 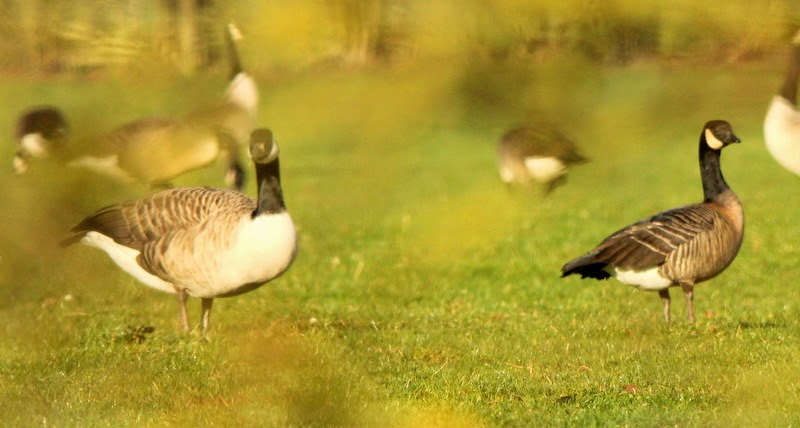 Cackling Goose (poss minima) with Canadas at Telford Cremortium. It looked tiny with the Canadas, but in this pic, it only looks a tad smaller. 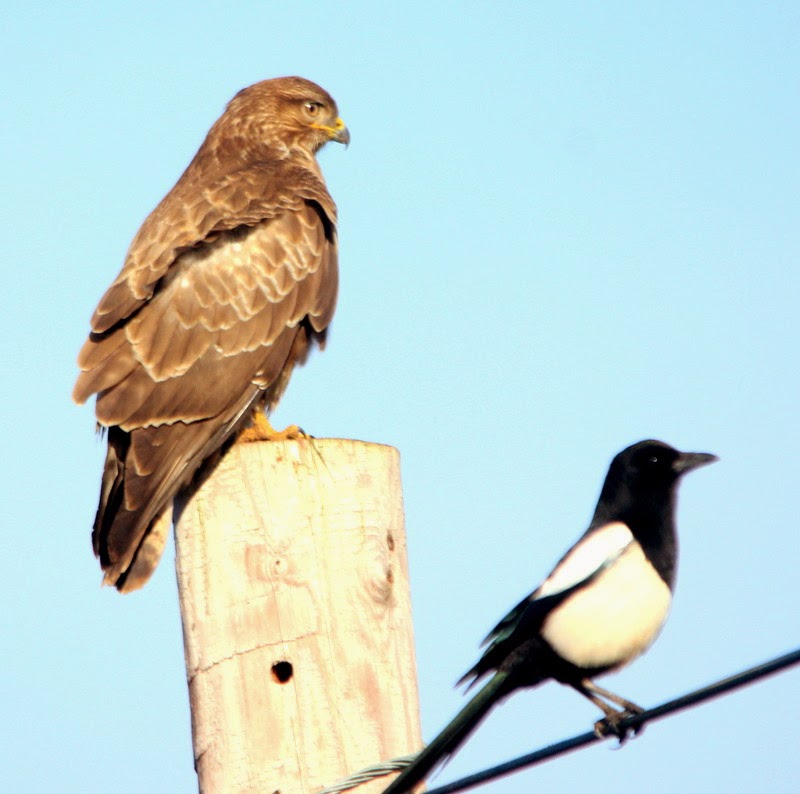 This Buzzard was keeping a watchful eye over the fields 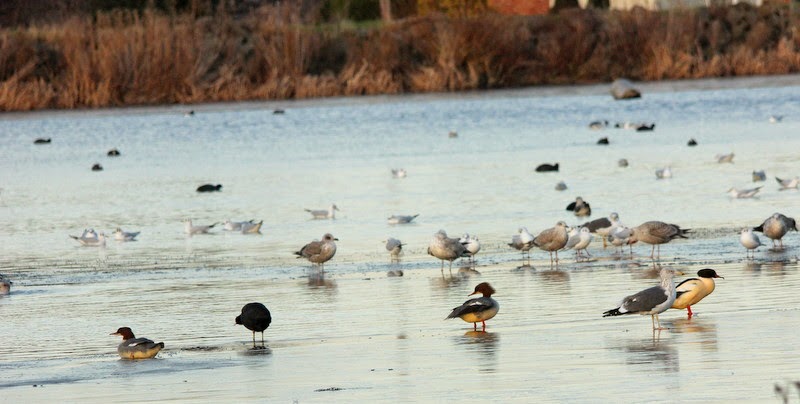 3 Goosander at Trench Pool but the Long-tailed Duck has long gone. 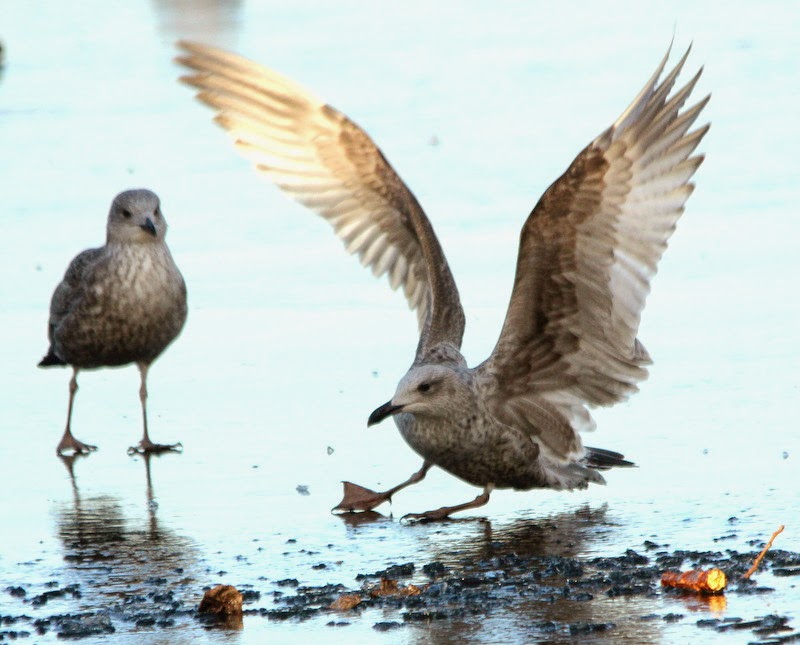 Crash landing on the ice