The Caribbean is not always paradise! 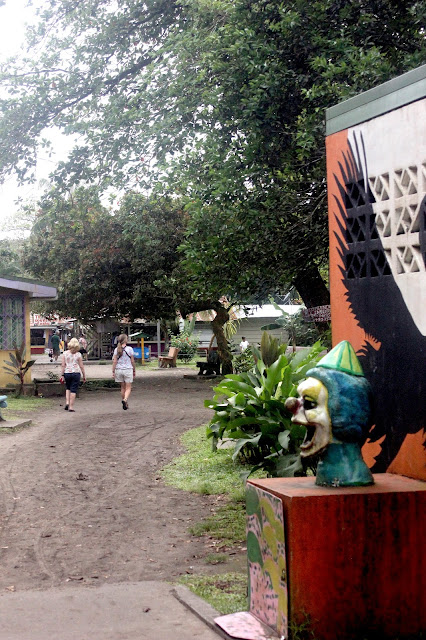 They've even got the head of Steven King's clown 'IT' keeping a careful eye on you!

Well that's my opinion here in Tortuguero and others that I've spoken to who have been stuck on this spit for the last few months! However, if you stay in one of the very expensive fancy lodges that are up and down the river and out of sight from the main village, then you might look at it as paradise! To create paradise in the first place, then you have to cut down a lot of jungle to make way for the space for the pretty villages. Like I said before, on arriving in the village, I was taken back by how many stray dogs were roaming the one main street. They nearly outnumbered the 600 folks that live there. These dogs might of been strays, but you never heard them barking, some of them looked in not so bad shape and they were all good old mongrels. While eating at a cafe outside on the street, two strays joined me and sat tight quietly by my side. Although they were smelly and scratching a lot from damn fleas, I couldn't help but stroke my new smelly mates. I was at home then really! The waitress came out to move them on, but I told her that it was ok and I gave them most of my food that I had. They were plastered and so obedient and I wanted to take them home with me. Every dog that I saw were well behaved. At the same time, with so many dogs spending most of there time on the main street, then you had to be careful where your walking. 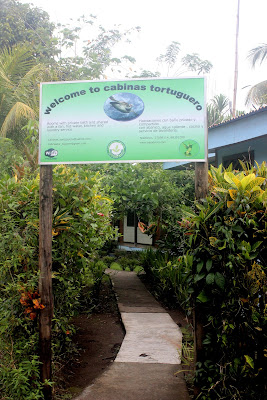 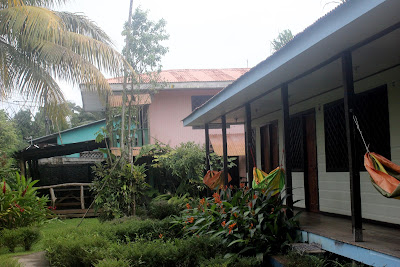 If you do visit Tortuguero village, I recommend staying at Tortuguero Hotel. There's everything you want and Very friendly owners. Just pray that they've knocked down the disco nearby! 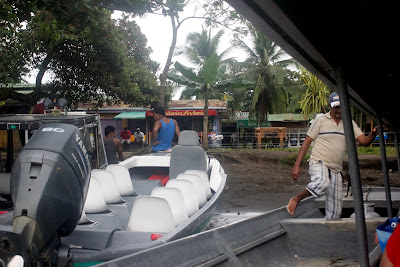 Taxis waiting in the village. What you've got to remember is that this might be a shabby village, but this is where and the way people live and work. That didn't bother me at all. 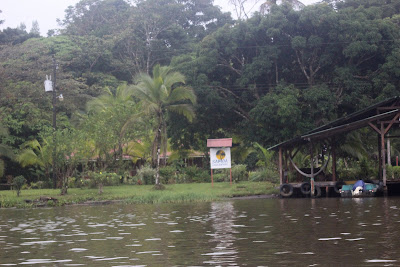 And here are the one of many impressive lodges located by the river. The only place I saw the visitors from these lodges go, was the park. However, it doesn't mean to say that they don't come to the shores of the village just because I didn't see them there during my brief stay.

As for the people here, they were very friendly, especially at the hotel, but some came across as dodgy and intimidating. I never felt that safe at night and was told that single woman have been attacked in the dark on the single path next to the west beach. That's the same in the national park, where visitors have been mugged during the day! Not by the people living in the area, but from elsewhere outside Tortuguero. Some of the kids and adults had these big silver chains weighing them down around their neck which would be ideal for securing my bike with. With the chains you've got to where a cap, the wrong way round, and then to complete it all, walk in a mean, intimidating swinging fashion, like you need a crap! I've always been told, never to go by appearances, but when I said hello to one of them, he looked me up and down and tried to show how hard he can be, by just staring. He must of been 17-18! I just smiled at him and shock my head. The other thing that I didn't like, was the very loud pop music coming out from the disco that I could hear from the hotel every night from 18.00 to the early hours of the morning! While I was having a shower at the hotel, hip-hop music, which I've got nothing against, was knocked out at full blast so everyone in the village, could hear it. If this ain't enough, two visitors drowned in the sea a few days before I arrived. I was told that it happens from time to time. Also, I discovered that one of the locals has been in prison for drug dealing, GBH as well as other related crimes, and I was told to stay well clear of him. In some ways, it's no different to anywhere else in the world!
This is just a tiny taste of what to expect from the village of Tortuguero if you decide to visit while in Costa Rica. However, you won't know what goes on behind closed doors. And remember, this is just my opinion, although speaking to visitors, they told me that they wouldn't stay here more than one or two nights.
Another shite thing today that happened, was rain stopped play and we didn't go ringing. 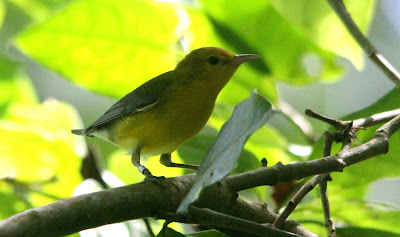 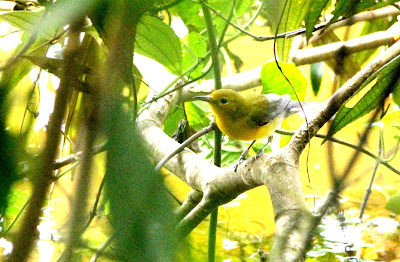 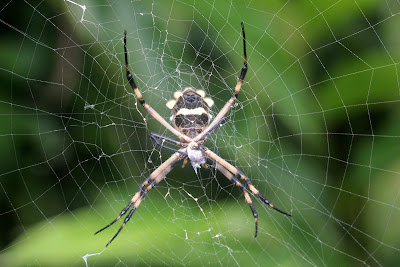 Nephila-orb Spider in the hotel garden 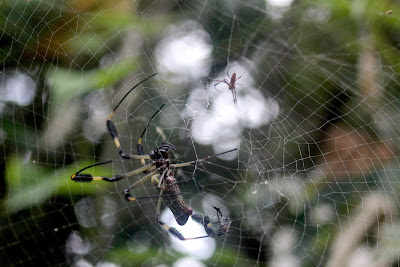 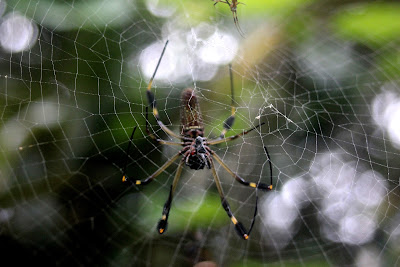 The Prothonotary Warbler was moving up river in the lower branches over hanging the river. From the bank I was trying to follow it and not consecrating, I walked straight into one of these, twice! The second time I went through, I found the female Golden-orb spider crawling all over my face and it took me, what seemed for ever, to get it off. I didn't want to brush it off and damage the spider. When I finally got her on my hand, my instinct was to flick it off in a whipping fashion towards the ground, but the bloody thing held on! This is the forth time I've walked through one of these strong nylon webs and even without the spider, when you get the web all over your face, it's still a very scary experience. However, I do love spiders, naturally!

Yesterday when I discovered that I was going ringing first thing in the morning, I asked the tour leader, Jack, if I could change from going canoeing to going with him in the national park instead at 15.00 this afternoon. As it was the same price, he had no problem. I wish I hadn't of gone now as it turned out to be not what I expected and the tour wasn't worth what I paid. It was 15.15 when we finally strolled through the entrance of the park. From here with three other visitors, Jack showed us  mostly about the plants that grow there for the first half an hour. Then he spotted Spider Monkeys high up in the canopy and two of us observed an adult  Common Black Hawk take one! The hawk landed on a branch some distance from us, but you could still see it. Well I could, because I had bins around my neck, while Jack was dangling one of those big silver chains around his. No bins and dressed in a sleeveless white top and white shorts. He really looked the part if was in a Hip-hop-scotch video! However, he did go and find a beautiful Golden-leaf Tree Frog. Fair play to him, but he called it somethin else. This is when I started to get upset and walked away. I had only took one pic of the frog, when Jack's hand came into my view-finder. He was trying to pull the frog from off the leaf that it was on to show us the golden underside. The frog was playing hard to get and stood it's ground. At the same time the three whiny, get on your nerves Americans, were egging him on to keep pulling it. This lasted for a good few minutes and I got so pissed off that didn't want to see anymore. I nearly said somethin, but he would of probably strangled me with his chain! If not, got the tall drug dealer from the village to kidnap me!. Walking away, this lady came up and calmly said that she had just found a Boa-constrictor! Magic stuff and she showed me where it was.
Later we passed this strange looking young guy gazing into space on the corner, with no chain, and I asked Jack who he was? 'He's known as the paint sniffer!' Oh I see, he's doing his brains in by paint sniffing! I felt sorry for the guy and wondered how many others were in a similar state? Pretty sad really. Jack also told me that the attacks in the park have stopped as the armed guards patrolling the area, have it all in control. All the way through the tour, I asked what the birds were calling and guess what? He didn't have a clue! Why ask a question when you know the answer?  Also, I spoke to the yanks later and discovered that they were in fact from Germany! Their English was very good!

Remember, this is my opinion of what I discovered and observed, although speaking to visitors, they told me that they wouldn't stay more than one or two nights. If anyone else has been to Tortuguero village, I would like to know what they thought of the area. You might of experienced the best holiday in your life! 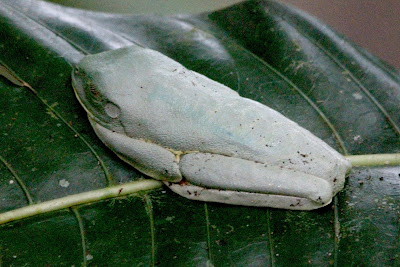 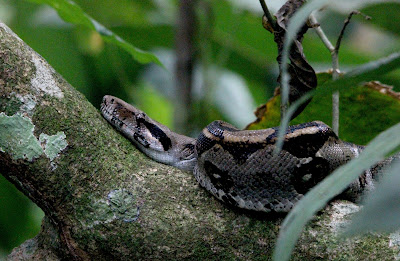 At least they torment this Boa-constrictor 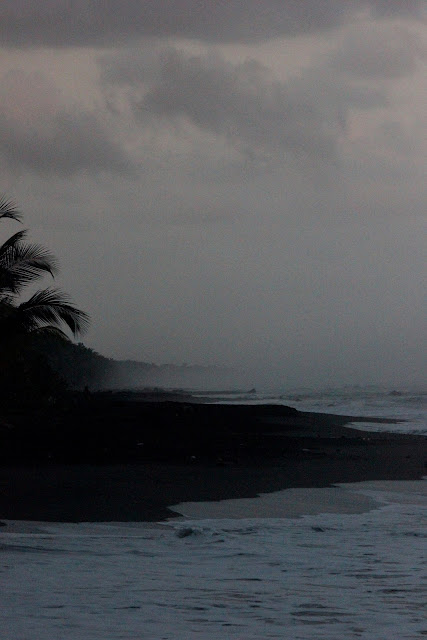 Rough seas on the west beach