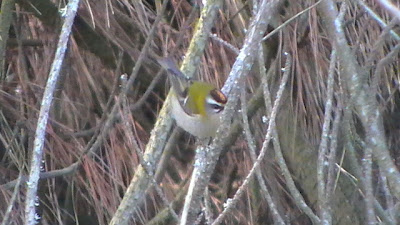 Firecrest at work
A look at the back of me garden before going to work, found the YELLOW-BROWED WARBLER, male Blackcap and over 15 Chiffchaff.

At the campsite on the Garrison, it was still with blue skies and I could see that Chaffinches were moving out SSW. Over an hour later, 200+ birds, with a flock of 50+, were heading towards Gugh. There were other species involved in the movement, including singles of Crossbill and Brambling. Some birds would fly overhead and straight out to sea. Others briefly came down and landed in the pines before moving on. I called Grayham, who happened to be on Gugh, to let him know what was going on. He told me that he had only seen 1 or 2 Chaffinches overhead.

Also in the area there were a single Firecrest, that I later saw at work, 3 Swallow, 6 Goldcrest, 10 male Blackcap, but only 2 Chiffchaff. 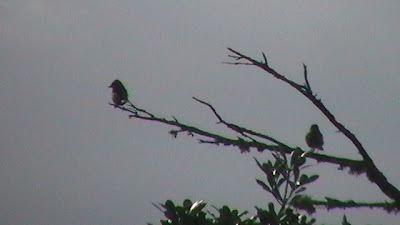 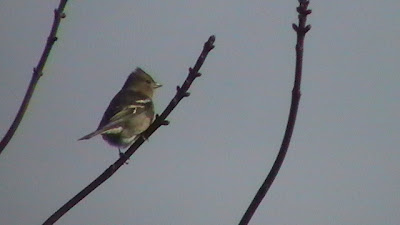 Chaffinch ready to fly out to sea from the Garrison 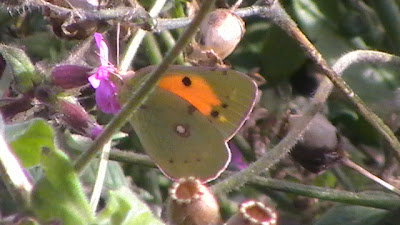 Small Tortoisehell, Red Admiral, Speckled Wood and this Clouded Yellow were all seen on the Garrison 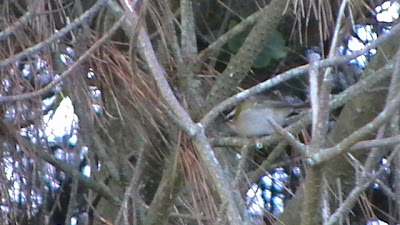 This FIRECREST was mobile moving through the pines at work
First thing this morning, there was a DUSKY WARBLER discovered at Buzza Hill in the gardens nearby. I thought, that's not the same bird that I had yesterday and just as I walked through the Black and White Wood at Lower Moors late morning, I could hear yesterdays DUSKY WARBLER calling and found it immediately feeding on the deck. It was showing pretty well and as I was just about to take a shot of it, it came up on the camera that the card was full. Shite! Later it was seen near the shooters pool by other birders. There were also only 2 male Blackcap, 5 Chiffchaff and the 2 YELLOW-BROWED WARBLER in the wood. I almost stood on my first Jack Snipe of the autunm in the surrounding fields.

Later, news came out that there was a HAWFINCH just off Green Lane. In the few minutes that I had, I only got a flight view. However, returning half an hour later, I connected with it through the scope, as it gorged itself on the Hawthorns, distantly in the top corner of the field.

Also today, the third RADDE'S WARBLER of the autunm was found at Troy Town, St Agnes. Nearby at Periglis Beach and Chapel Fields, a CENTRAL ASIAN LESSER WHITETHROAT was indentified after being present for it's firth day and will be the first Scilly record!


Filmed at Wilbraham Road station south Manchester '64. Listen to the great voice and one hell of a guitarist, of the gospel singer, Sister Rosetta Tharpe 'Didn't it Rain' I just love how the crowd are separated by the railway tracks.
Posted by scilly spider at 10/25/2011 10:48:00 pm