This SIBERIAN CHIFFCHAFF, at Porth Hellick,  showed down to a few meters in front of Paul and I. When I finished recording, the bloody thing started giving it's Bull finch 'type' call! It had stopped when I put the camera back on.

Got up this morning and felt a lot better. By early afternoon the wind had dropped and the sun appeared and that's when I decided to venture out. Overhead 4 Snipe flew over the house and as I drove past Newford Duck Pond, I couldn't help but see the tame Water Rail by the side of the road. I parked up and it came running towards me with the ducks. I then noticed another Water Rail to my left, but it ran into cover. Just like the damn cat that was hiding under the bench when I arrived. I think these 2 Water Rails wont be be around for long. I bumped into Paul on his farm at Trenowth and while he was talking to me, the Buzzard was being mobbed by 3 Crows just over the pines nearby. I thought it would be a good idea to walk along the coastal path at Bar. Here, there were a lot of Redwings around and a single Whimbrel, Greenshank and Redshank were roosting with 5 Bar-tailed Godwit and 14 Curlew at high tide. Just before 15.00, Higgo called to say that 2 drake GOOSANDERS flew over Porthmellon heading towards town. Back to the taxi to check out the bays. No luck, however, Porthcressa was teeming with stuff. A Grey Plover was the first I've ever seen on this beach. Also feeding at the waters edge included, Redwings, Ringed Plovers, 3 Common Gulls, 20+each of Rock Pipits and Turnstones, 30+Sanderlings and the 1st winter male Black Redstart. The other 1st winter Black Redstart was also still present in Tregs car park. 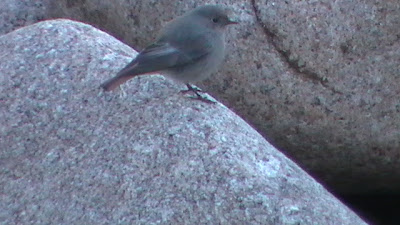 
It was getting dark and I thought Porth Hellick might be my last chance. On the way I picked up Paul and as we went through the gate at the crossroads, I found one of the SIBERIAN CHIFFCHAFFS feeding in the Sallows with a Chiffchaff to our left. it flew down and started feeding at very close range on the deck. I filmed it for about a minute and when I was done and turned the camcorder off, it started to bloody call! No sign of any Goosanders, but there was a Firecrest with 4 Goldcrests and 9 Snipe came in. 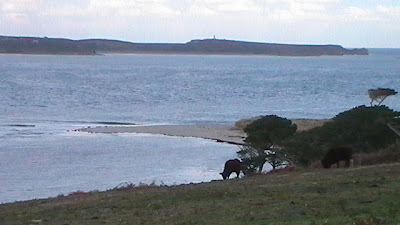