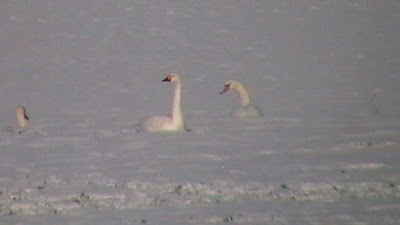 Adult Whooper Swan with 2 Mute Swans at Cressage
I was scraping the ice off the windscreen at about 9.00 this morning and I heard a croak above me. RAVEN!! I looked up and saw two birds fly NW just over the houses. Infact, they looked like they were both coming down, but I couldn't be to sure as they went low behind the houses. This was a garden/flyover tick. When I left Shropshire to go to Scilly, nearly firthteen years ago, a Buzzard was never recored over the garden. Now when I come home, I see 2-3 birds on many occasions in the air together, just above the houses. Maybe Raven might go the same way, although I can't see it really happening.
With everything frozen up, the River Seven should be alive with stuff and maybe something good might be with them. I walked at least a mile along the Seven at Lieghton, near Buildwas, and the highlights included a drake Pintail and 2 duck Goldeneyes. The Pintail was with over 100 Mallards, 8 Tufted Ducks, 13 Goosanders, 30+Wigeon, 33 Coots and 10 Little Grebes.
I left the Seven and moved on and as I just drove out of Cressage heading towards Shrewsbury, I noticed some Mute Swans in a field to my right. Two of the birds had straight necks and I turned around to have a better look at them. They were quite distance, but I identified 6 Whooper Swans. There were 4 aults and 2 1st winter birds with 15+Mute Swans.
A quick look at the River Seven at Atcham, found nothing, because the river was totally frozen over!

On Scilly, one of the locals asked Martin Goodey what a bird in her garden might be? When Martin looked, he had a bit of a shock when he saw a Rose-coloured Starling! Hopefully the bird will stick around when I return home. 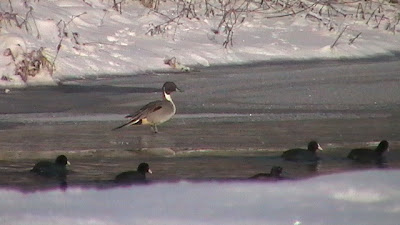 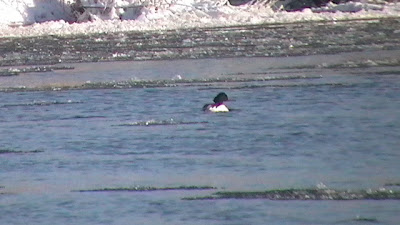 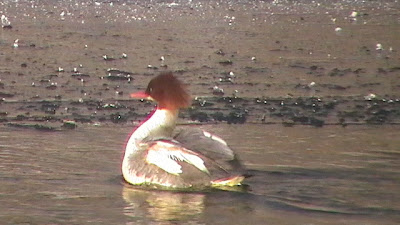 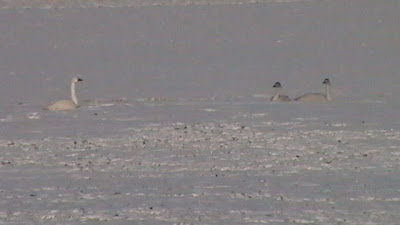 An adult and 2 1st winter Whooper Swans at Cressage. Altogether there was a family of four, with another 2 adults feeding in the next field. All these swans were a very long way off. 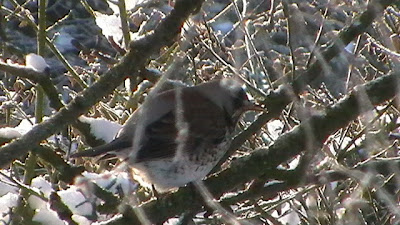 About 40 Fieldfares were feeding on fallen apples at Preston 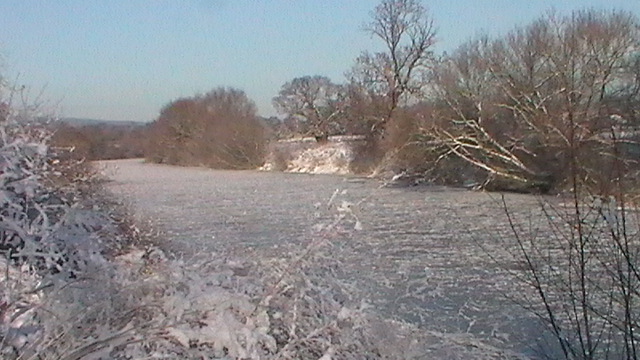