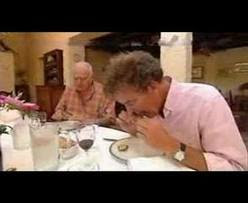 Clarkson getting stuck into an Ortolan Bunting. If only he choked to death on it with the rest of his friends.
So, the buntings are trapped alive, blinded (so that they would not move and lose any calories), force-fed (four times it's regular size), drowned in brandy (so that their little lungs would have a good burst of taste), and then﻿ roasted to be ready to eat. 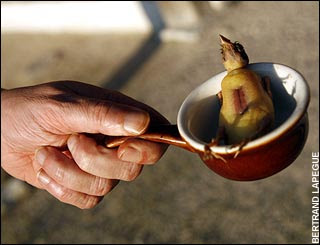 Ortolan Bunting ready to be roasted after being drowned in alcohol
If he did choke to death on eating the Ortolan Bunting in one gulp, then we wouldn't have his sensitive and intellectual comments on global warming, the enviorment and humanity in general. Once again is Clarkson topping up his pool of negativity under the auspices of his own profitable laddish market brand?

About 31,000 people complained to the BBC over Clarkson's comments last month on the One Show when he joked about executing public sector workers  in front of their families for going on strike.
His good mate, David Cameron, told Mr Clarkson that it was a 'silly thing to say' 'Disgraceful and disgusting' were the comments from the leader of the Labour Party, Ed Miliband and  the Unison’s Assistant Secretary General Karen Jennings has responded to Jeremy Clarkson’s idiotic remarks about “executing” striking public sector workers “in front of their families” by saying that this is “almost like Gaddafi”. She went on to say, 'I get the point. This kind of savage reaction is the sort of thing you might – might – see in very repressive countries. The one that springs to my mind is Saudi Arabia, about which there’s a new report from Amnesty. In Saudi Arabia, of course, trades unions aren’t even allowed to exist. If nurses or care workers or teachers or street cleaners there ever contemplated a strike, they’d very quickly find themselves in prison. So what does she think of that dim-wit who is also Cameron's mate? London Mayor Boris Johnson supported Clarkson's remark, that striking public sector workers should be shot.
Ofcom also received 736 complaints. Clarkson was forced later to apologise saying: "I didn't for a moment intend these remarks to be taken seriously - as I believe is clear if they're seen in context.
"If the BBC and I have caused any offence, I'm quite happy to apologise for it alongside them."
Unison accepted his apology and invited him to spend a day with a healthcare assistant. A day with a healthcare assistant!?

A high court judge compared John Terry's alleged racist comments to Anton Ferdinand to that of Jeremy Clarkson by saying, that a opinionated celebrity as far as I'm aware, has got away with the recent remarks he made on a BBC 1 premier live show.
John Terry has been ordered to appear at West London Magistrates Court on February 1st, having allegedly called QPR defender Ferdinand a ‘f******* black ****’ during a Barclays Premier League match in October. The maximum penalty is £2,500. That's 2 hours and 38 minutes out of the Multi-millionaire.
I believe that both Terry and the Liverpool forward, Luis Suarez, are not racist. Suarez has been given a 8 match ban after the racist remarks he made at the Manchester United left-back, Patrice Evra. I can't work out why Wayne Rooney got a 3 match ban while playing for England from kicking Miodrag Dzudovic of Montenegro. Rooney cried to the Uefa and they reduced it to a 2 match ban. This has never been done before. So, if you are racist to someone then you get a 8 match ban. However, if you kick someone twice, when the ball is ten miles gone up the road, then you get a 3 match ban. Sorry, a 2 match ban. How does that work? Both Terry and Suarez are highly looked upon as heros by very young fans. If Terry is found guilty, then he should not play for England again. Already very recently, the England’s kit sponsors, Umbro, kicked off the photograph of John Terry as captain on their official website. He's not even on the England team photo. 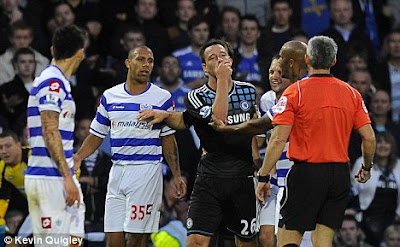 'Did I just say something stupid again?'
Returning to the Ortolan Bunting, the 'context' is that Jeremy Clarkson has always been self-centered and right-wing. Remember Clarkson's insult on the Prime Minster, Gorden Brown 'a one eyed Scottish idiot'
Also, has anyone ever told him that jacket and jeans will never come back into fashion. Were they ever in fashion? How can anyone like this guy?


If you like Jeremy Clarkson for his outbursts of being a major dumbass and you haven't seen this video before, then you might have a different opinion on him. All of them should be shot in front of their families! Especially Mr Clarkson. Mr Clarkson, if you ever read this, I was only joking
Posted by scilly spider at 12/24/2011 02:47:00 pm