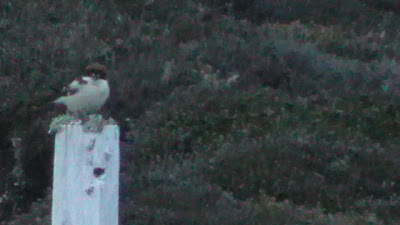 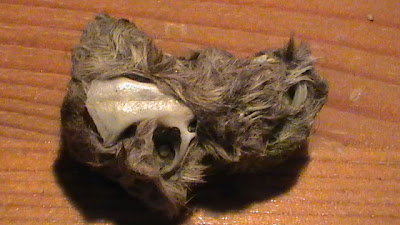 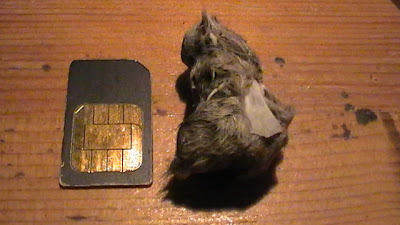 And here is the pellet that I found at the bottom of the post. The whole pellet consist of a Scilly Shrew.

A quick circuit around the Garrison in a easterly produced, 2 Chiffchaff and 2 Swallow and by the Woolpack, a female Pied Flycatcher. 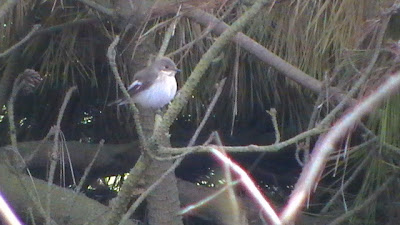 Female Pied Flycatcher at the Woolpack, Garrison
Later at Porth Hellick there were, 2 Reed, Sedge and 3 Willow Warbler, 4 Blackcap, 9 Chiffchaff, 6 Sand Martin, 30+Swallow, 1 Snipe, drake Tufted Duck and new in, Green Sandpiper.
Mid afternoon and Big Al had a Wood Sandpiper, but more interesting was that he heard a HOOPOE while he was in the Sussex hide!. A few minutes later, I joined him and he told me that two visiting birders observed the HOOPOE come in off the sea while they were walking the coastal path from Giants Castle! A few minutes later, Big Al couldn't believe what he was hearing! I didn't see the sandpiper and started searching for the Hoopoe at Salakee while Big Al looked at Carn Friars. I saw nothing of note and got a call to go back to work. As I passed under the pines at the start of the loop trail, I flushed the Short-eared Owl! It flew off low towards Kittidown, where I lost it. Big Al choose the right location and re-found the male WOODCHAT SHRIKE and with Robin, the HOOPOE on the track going towards Camel Rock! 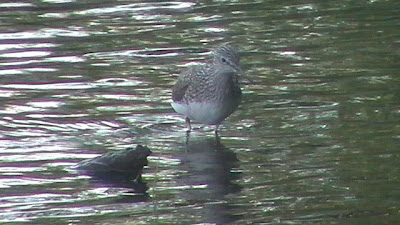 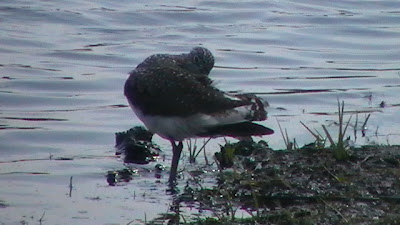 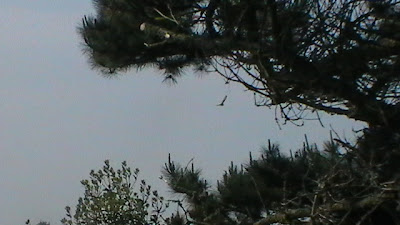 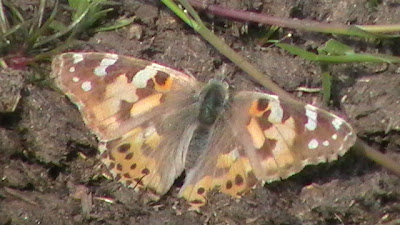 Painted Lady at home
Just after 20.00, Robin and I were looking for a cukoo at Porth Minnick that Tony found. There was no sign of it and on my own I carried on walking towards Giants Castle along the coastal path. At the latter site there was a single male Ring Ouzel and on one of the posts, the male WOODCHAT SHRIKE. When the shrike had moved on further down the road, I started looking hopefully for one of it's pellets at the bottom of the post and immediately found one!
It was almost dark when I heard the loud eerie cry of a Great Northern Diver out at sea. It was coming from the ESE and the diver continued looning, on and off,  for a good five minutes. I've only heard GN Divers once and that was off Bar Point. 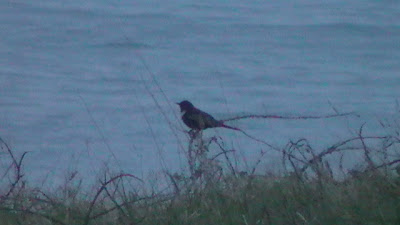