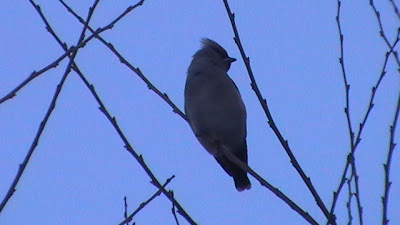 One of the 6 Waxwings at Folkestone.
At 9.00 we were zipping down the M20 towards Dymchurch where there were 4 Northern Long-tailed Tits that have been present in the area for the last few weeks. Within ten minutes of looking around the graveyard, I could hear Long-tailed Tits and found 8+birds, but no sign of the Northern's. After half an hour there were 10 birders also looking around, but still no sign. A local birder tipped me off that there was a wintering Great White Egret just around the corner. He told me that it gets in the dykes next to the Botolph's Bridge Inn, West Hythe, and sure enough I found it, way in the distance, just sticking it's neck up above a dyke, opposite the inn. This is only the third I've every seen in this country.
Gayna wanted to do some shopping in Folkestone and as we drove past the seafront, I spotted an adult and 3 1st winter Mediterranean Gulls flying close inshore. After an hour of shopping, we made our way out of the town center. This took longer than I thought and ten minutes of driving around, we found ourselves back at the carpark where we had just come from. I pulled in, to turn around, and as I drove towards the juction, I said to Gayna 'There Waxwings'?! Six in total, high up in a tree, right inbetween a very busy road in the center of town. They only came down to feed on Rowan Berries across the road.  I love shopping!!
It came on the pager that there were two different Northern Long-tailed Tits found at nearby Kingdown. Another chance for us to catch up with this beauty, maybe? However, it wasn't to be and we left half an hour before dark.
Never the less, I had a great day and I'll be trying for the Northern's again in the next few days. 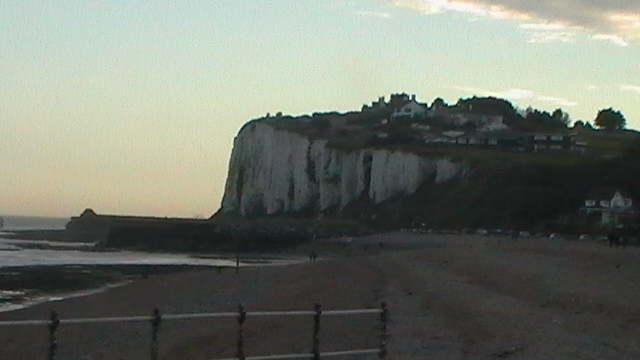