3 WAXWINGS just off the Trench Road opposite the police station at Donnington. The light was very dull and this is the closest I could get to them at the time.

Early afternoon Gayna and I set off to go and see the 18 Waxwings that have been present in the Shrewsbury area for the last few days. We first stopped off at Trench Pool to feed the ducks and found that the Goosanders had moved on. There was an adult Great black-backed Gull and 1st winter Common Gull on the ice of any note and a Great spotted Woodpecker in the trees above us, was more than likely the one I had in the garden, only six days ago. 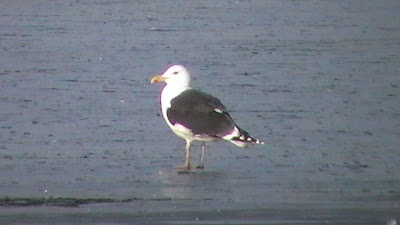 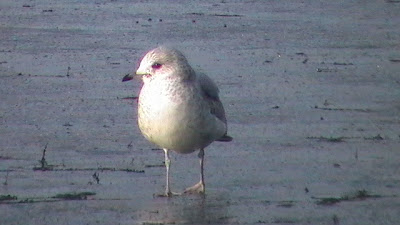 1st winter Common Gull at Trench Pool
We left Trench Pool and I thought I would have a quick look at nearby Donnngton, where I knew there were some good berry Trees. Driving along Trench Road, I spotted a WAXWING at the top of a Silver Birch, opposite the police station at Donnington! Nowhere near the berry trees where I had planned, but this was sound. I parked the car and found that it had flown off. We walked around the area for a good ten minutes, but no joy. I had to go to the bank and returned quarter an hour later and found 3 WAXWINGS not far away from where I had seen the single bird! These birds proved very mobile and after a few mintues, they all flew off towards Donnington. It paid off and we didn't need to go to Shrewsbury and decided to go for a walk down Hortonwood instead. 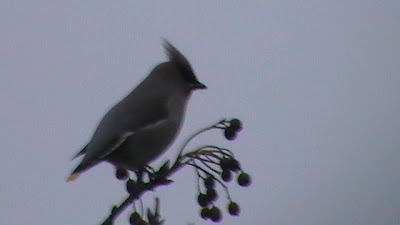 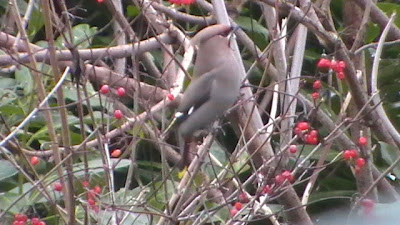 All 3 WAXWINGS were very mobile and proved very difficult to photo when feeding in folks back gardens
Posted by scilly spider at 1/06/2011 08:41:00 pm