Driving down the M1 approaching junction 18 just before 12 last night, a Barn Owl floated past in front of the car to the otherside of the motorway! This was followed an hour later by another Barn Owl hunting at the side verge of the M25, just past the Potters Bar juction! Three different Barn Owls in less than a week! As we approached Gayna's house, we followed a Fox slowly walking beside the car, until it found some chips, and then it crossed at a bloody zebra crossing! I'll be Looking forward to the return trip back to Shropshire. 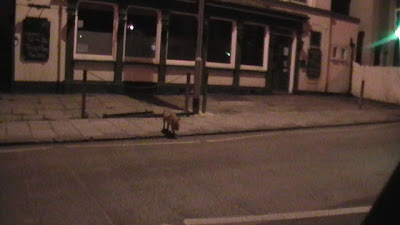 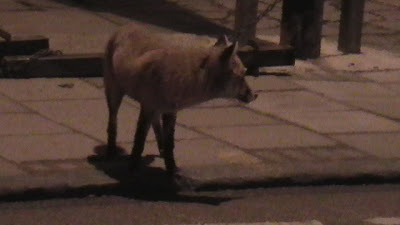 Getting stuck into some chips just outside at the pub, The Woodman, Dartford
My third visit to Rainham Marshes was pretty poor. Johnny Bushnell and I spent most of the moring looking for Water Pipit. All we could produce were 12 Rock Pipits feeding at the side of the Thames on the RSPB reserve. An adult Yellow-legged Gull was at the Stone Barges and the only other birds of note were a male Stonechat, Little Egret and 18 Black-tailed Godwits, all at the Target Pools. Wildfowl on the reserve included, 30+Pintails, 45+Shovelers and 100's of Wigeon and Teal. Just before dark, over 50 Ring-necked Parakeets flew over the RSPB center towards Crayford Marshes  on the otherside of the river. 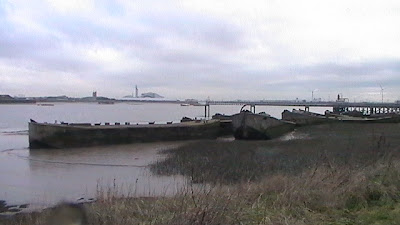