THE ASSANGE ARREST IS A WARNING FROM HISTORY 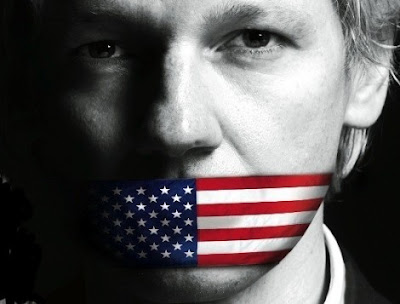 A DARK DAY FOR JOURNALISM!!

THE ASSANGE ARREST IS A WARNING FROM HISTORY by John Pilger http://johnpilger.com/

The glimpse of Julian Assange being dragged from the Ecuadorean embassy in London is an emblem of the times. Might against right. Muscle against the law. Indecency against courage. Six policemen manhandled a sick journalist, his eyes wincing against his first natural light in  almost seven years.

That this outrage happened in the heart of London, in the land of Magna Carta, ought to shame and anger all who fear for "democratic" societies. Assange is a political refugee protected by international law, the recipient of asylum under a strict covenant to which Britain is a signatory. The United Nations made this clear in the legal ruling of its Working Party on Arbitrary Detention.

But to hell with that. Let the thugs go in. Directed by the quasi fascists in Trump's Washington, in league with Ecuador's Lenin Moreno, a Latin American Judas and liar seeking to disguise his rancid regime, the British elite abandoned its last imperial myth: that of fairness and justice.

Imagine Tony Blair dragged from his multi-million pound Georgian home in Connaught Square, London, in handcuffs, for onward dispatch to the dock in The Hague. By the standard of Nuremberg, Blair's "paramount crime" is the deaths of a million Iraqis. Assange's crime is journalism: holding the rapacious to account, exposing their lies and empowering people all over the world with truth.

The shocking arrest of Assange carries a warning for all who, as Oscar Wilde wrote, "sew the seeds of discontent [without which] there would be no advance towards civilisation". The warning is explicit towards journalists. What happened to the founder and editor of WikiLeaks can happen to you on a newspaper, you in a TV studio, you on radio, you running a podcast.

Assange's principal media tormentor, the Guardian, a collaborator with the secret state, displayed its nervousness this week with an editorial that scaled new weasel heights. The Guardian has exploited the work of Assange and WikiLeaks in what its previous editor called "the greatest scoop of the last 30 years". The paper creamed off WikiLeaks' revelations and claimed the accolades and riches that came with them.

With not a penny going to Julian Assange or to WikiLeaks, a hyped Guardian book led to a lucrative Hollywood movie. The book's authors, Luke Harding and David Leigh, turned on their source, abused him and disclosed the secret password Assange had given the paper in confidence, which was designed to protect a digital file containing leaked US embassy cables.

With Assange now trapped in the Ecuadorean embassy, Harding joined the police outside and gloated on his blog that "Scotland Yard may get the last laugh". The Guardian has since published a series of falsehoods about Assange, not least a discredited claim that a group of Russians and Trump's man, Paul Manafort, had visited Assange in the embassy. The meetings never happened; it was fake.

These "things" are the truth about the homicidal way America conducts its colonial wars, the lies of the British Foreign Office in its denial of rights to vulnerable people, such as the Chagos Islanders, the expose of Hillary Clinton as a backer and beneficiary of jihadism in the Middle East, the detailed description of American ambassadors of how the governments in Syria and Venezuela might be overthrown, and much more. It all available on the WikiLeaks site.

The Guardian is understandably nervous. Secret policemen have already visited the newspaper and demanded and got the ritual destruction of a hard drive.  On this, the paper has form. In 1983, a Foreign Office clerk, Sarah Tisdall, leaked British Government documents showing when American cruise nuclear weapons would arrive in Europe. The Guardian was showered with praise.

When a court order demanded to know the source, instead of the editor going to prison on a fundamental principle of protecting a source, Tisdall was betrayed, prosecuted and served six months.

If Assange is extradited to America for publishing what the Guardian calls truthful "things", what is to stop the current editor, Katherine Viner, following him, or the previous editor, Alan Rusbridger, or the prolific propagandist Luke Harding?

What is to stop the editors of the New York Times and the Washington Post, who also published morsels of the truth that originated with WikiLeaks, and the editor of El Pais in Spain, and Der Spiegel in Germany and the Sydney Morning Herald in Australia. The list is long.

David McCraw, lead lawyer of the New York Times, wrote: "I think the prosecution [of Assange] would be a very, very bad precedent for publishers... from everything I know, he's sort of in a classic publisher's position and the law would have a very hard time distinguishing between the New York Times and WilLeaks."

Even if journalists who published WikiLeaks' leaks are not summoned by an American grand jury, the intimidation of Julian Assange and Chelsea Manning will be enough. Real journalism is being criminalised by thugs in plain sight. Dissent has become an indulgence.

In Australia, the current America-besotted government is prosecuting two whistle-blowers who revealed that Canberra's spooks bugged the cabinet meetings of the new government of East Timor for the express purpose of cheating the tiny, impoverished nation out of its proper share of the oil and gas resources in the Timor Sea. Their trial will be held in secret. The Australian prime minister, Scott Morrison, is infamous for his part in setting up concentration camps for refugees on the Pacific islands of Nauru and Manus, where children self harm and suicide. In 2014, Morrison proposed mass detention camps for 30,000 people.

Real journalism is the enemy of these disgraces. A decade ago, the Ministry of Defence in London produced a secret document which described the "principal threats" to public order as threefold: terrorists, Russian spies and investigative journalists. The latter was designated the major threat.

The document was duly leaked to WikiLeaks, which published it. "We had no choice," Assange told me. "It's very simple. People have a right to know and a right to question and challenge power. That's true democracy."

What if Assange and Manning and others in their wake - if there are others - are silenced and "the right to know and question and challenge" is taken away?

In the 1970s, I met Leni Reifenstahl, close friend of Adolf Hitler, whose films helped cast the Nazi spell over Germany.

She told me that the message in her films, the propaganda, was dependent not on "orders from above" but on what she called the "submissive void" of the public.

"Did this submissive void include the liberal, educated bourgeoisie?" I asked her.

"Of course," she said, "especially the intelligentsia.... When people no longer ask serious questions, they are submissive and malleable. Anything can happen." 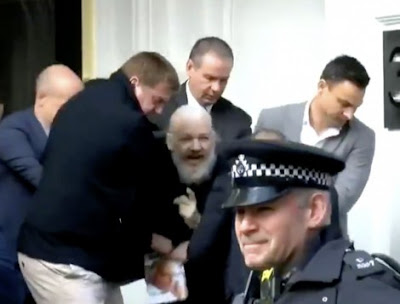 The arrest of Assange today


Legendary journalist and film-maker John Pilger who discusses the arrest of Julian Assange after his asylum status was revoked by Lenin Moreno of Ecuador and subsequent removal from the Ecuadorian Embassy. He discusses the importance of Wikileaks’ work, why it is a threat to the United States, the danger the arrest poses to journalists everywhere and the possibility of extradition to the US.
Follow John Pilger on twitter @johnpilger
Posted by scilly spider at 4/13/2019 05:25:00 pm