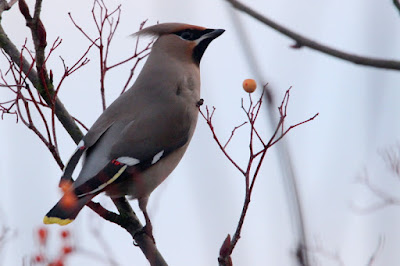 There were 2 Waxwing at Cockshutt near Ellesmere including this 1st winter male, 4-7th Jan

I returned from Oman to Salop and the following morning, 18th, I made the minute drive from my parents to Trench Pool on the way to the shops. A Little Egret was at the east end in the trees and was a first for me here and only the second site record. There were also 11 Goosander but the next day when I turned up at 13.00, this had built up to an amazing 103 Goosander! It wasn't until over a week later, 27th, that I decided to go and try the floods at Melverley and was rewarded with a single adult Mediterranean and LBBGXHerring Gull and 22 Whooper Swan. A dash to the meres shortly after and at Crosemere I got one of the 3 Great White Egret that are in the area at the moment. A stop off at Whitemere and a brief but good view of Lesser-spotted Woodpecker near to the club house but nothing in the gull roost at Ellesmere of note. 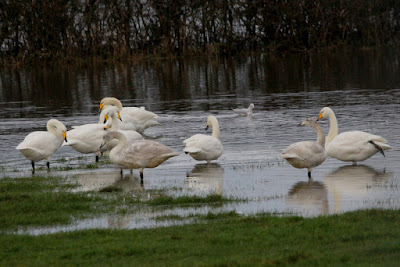 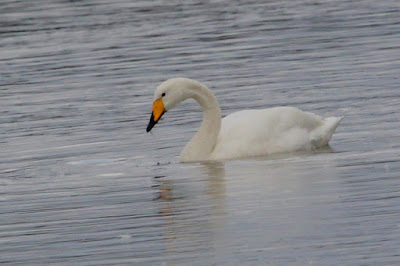 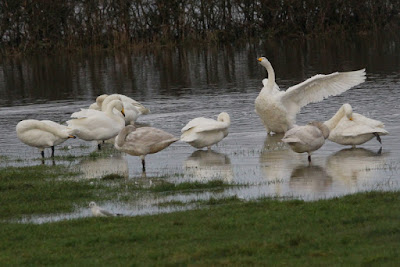 There were up to 22 Whooper Swan at the Melverley floods 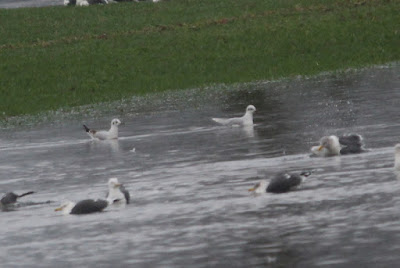 Plus this record shot of an adult Mediterranean Gull 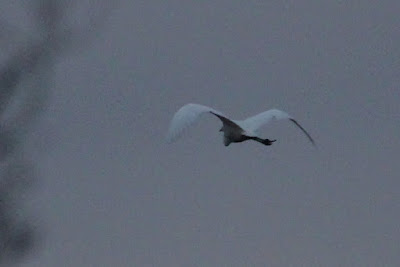 Shortly afterwards I disturbed this Great White Egret at Crosemere. One of the three birds that are hanging around in the area.

I was hoping that I might get a Salop tick in the form of a Cattle Egret as there are few knocking around in Staffordshire, including three up road from my parents house at Belvide, while I was in the county over the winter period. The following day, 28th, Alan Heath went and found a single on the island at Ellesmere! Ideal! However, I couldn't get there until the 31st and I observed the Cattle Egret preening with 65 Cormorant on the island at Ellesmere. 3 adult yellow-legged Gull also roosted with some 500+Lesser-black backed Gull.
It was three days later that I found myself making my ways towards Ellesmere again to twitch 2 Waxwing that Graham Walker had in the village of Cockshutt on his ways to the former site. Both birds showed superbly in the dull light for the hour that I was there. I finished the day off with nothing in the Ellesmere roost. Thanks for the tip off from Rob Dowly, shortly before this, I got the Cattle Egret feeding with Highland cattle next to the 495 immediately after turning off the Ellesmere turning.
On the 4th Jan, I had a look at Venus Pool and the only birds of note was a high count of 39 Gadwall nextdoor on the sailing lake with also 8 on the pool itself giving a very high total for the  county of 47 Gadwall. Returning home, I stopped off at Coundlane to scan the large Mute Swan flock for the 6 Whooper Swan that have been around for awhile. No Whoopers but a single adult Bewick's with 109 Mute Swan was a new bird in and it was still present today. while I was in Kuwait, a Great Northern Diver turned up at Chelmarsh and was still there on the 5th but I just didn't have time to go and see it. 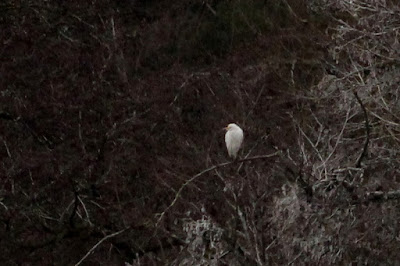 This Cattle Egret at Ellesmere, was a Salop tick for me and I'm sure I'll see others over the coming years as it's turning up more regularly in the county and could go the same way as Great White Egret. The Cattle Egret was still being observed coming into roost at Ellesmere, 7th Jan 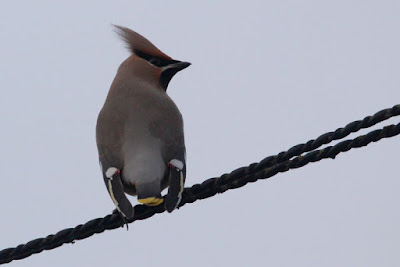 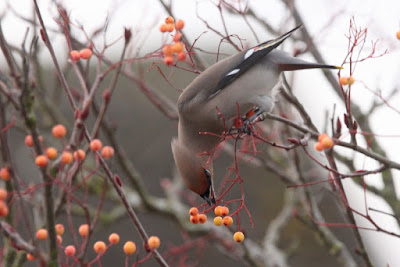 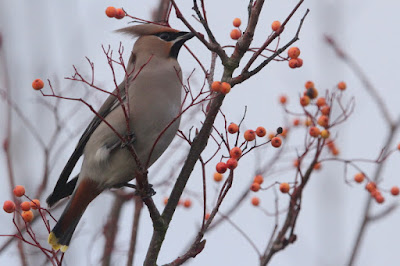 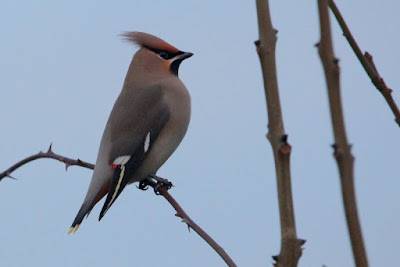 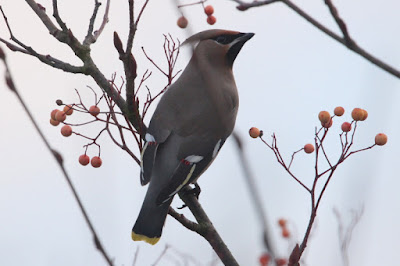 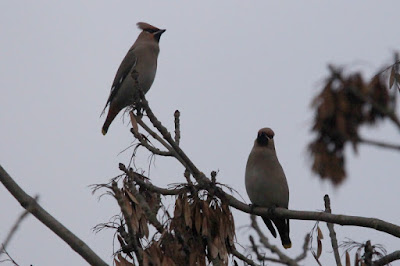 These 2 1st winter male Waxwing were taking advantage of the berries at Cockshutt just off the turning to Bagley. It was nearly thirty years ago that I had 2 Waxwing at Bagley at the same time when there were also 2 Hen Harrier, 3 Merlin and a single Short-eared Owl wintering in the area! A great patch I used to watch every day as I lived on Baggy Moor and I don't think anyone watches it anymore. The Cockshutt individuals were still present today 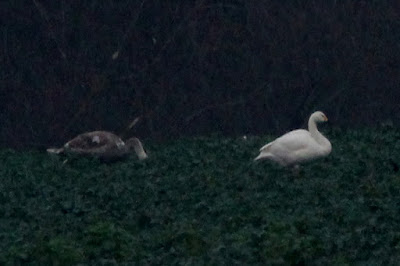 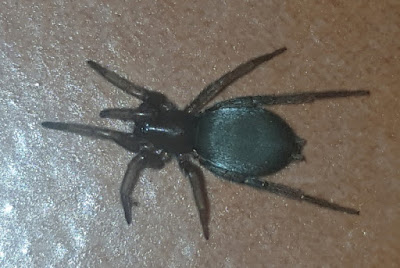 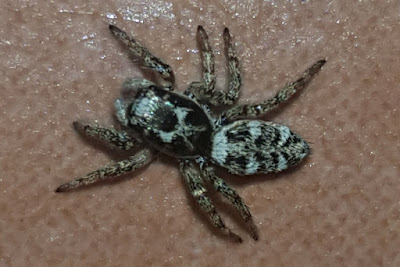 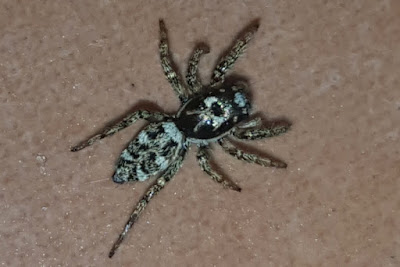 Last week I found this Mouse Spider, top, in the kitchen in Telford and the two bottom pics is thought to be a Salticus zebraneus or cingulatus. A very good winter record of the latter species of jumping spider.

Broken Social Scene is a Canadian indie rock band, a musical collective including as few as six and as many as nineteen members, formed by Kevin Drew and Brendan Canning.[1] Most of its members play in various other groups and solo projects, mainly in the city of Toronto. These associated acts include Metric, Feist, Stars, Apostle of Hustle, Do Make Say Think, KC Accidental, Emily Haines & The Soft Skeleton, Amy Millan, and Jason Collett.
The group's sound combines elements of all of its members' respective musical projects, and is occasionally considered baroque pop. It includes grand orchestrations featuring guitars, horns, woodwinds, and violins, unusual song structures, and an experimental, and sometimes chaotic production style from David Newfeld, who produced the second and third albums.